If there’s anything I’ve learned with regards to Kalamine Records it’s to expect the unexpected, and this new one from Eisenlager was something I definitely wasn’t expecting. This drags us along into the territory marked on the map as experimental electro-acoustic, with side trips to ambient and noise, utilising all manner of artefacts and artifices to create truly weird and wonderful audio landscapes on worlds which are bizarre mirrors and inversions of the one we inhabit. It’s as if Eisenlager are inviting us to reflect upon our own environments, and then to contemplate how, with a slight twist of reality, things could potentially be so very different.

Take ‘Shae am Grünen Arm’ (Shae on the Green Arm), as a prime example, which just so happens to be the opening track. It begins with a distorted tinkling piano piece, presumably taken from an old vinyl record, before noisy rumblings come along and subsume it, interrupting the flow and completely inverting the mood. Gradually a mechanical rhythm takes over, reminding one of old-school industrial from the mid-nineties era, jerking and stuttering like some automated factory machine that’s been running for who knows how long and is on the verge of running out of power. It’s the sound of ordered decay, the steady dissolution of energy and movement, the powering down of obsolete technology perhaps. In complete contrast ‘Köningsmund’ (King[’s] Mouth) comes to us from the opposite end of the spectrum, even though it begins with a mishmash of samples and sounds until it broadens out into an ambient skyscape of blue horizons and rolling green hills. It shimmers and shines by its own neon-bright light, swirling and swooping endlessly, settling to earth and almost immediately taking flight again. As it progresses, however, there are signs of encroaching gloom appearing, as if saying that nothing is ever permanent or remains static, and that motion is perpetual.

‘Mätresse’ (‘Mistress’) is a curious concatenation of twinkling music box tinkles and stuttering electro beats, accompanied by miraculously hanging chords as if of some distant choir. This too is an open landscape, perhaps of a harmonious admixture of the old and the new, of technology and the organic and natural, where each element complements the other. ‘Schwartzwasser’ (Blackwater) is next, a sharp, nervous bag of urgent energy, all finely-honed edges and blade-like steeliness. Chaos, madness, and anarchy lie behind this, but something is just managing to contain it: even so it’s just waiting for some trigger to detonate it in one huge orgasmic explosion. ‘Turm der Hand’ (Tower of the Hand) is disorganised and atonal, at least initially, until it settles into a series of mesmerising echoes and reverberations, like drips of sparkling water. Again, this is a clean and clear landscape, a pristine untouched environment whose beauty is frozen both physically and metaphysically.

‘Im Roten Bergfried’ (In the Red Keep) suggests something grandiose, implacable, made of impregnable stone, and forever unassailable. From its trumpet and flute opening we get the feeling we’re approaching some old Schloss somewhere in the medieval heart of Germany, until almighty distorted guitar chords, entirely suggestive of heavy mass, weight (both physical weight and the weight of time), and solidity, rear up walls of impenetrability and permanency before our very eyes, taunting and daring us to tear them down.  ‘Ich bin Euer, und ihr seid mein’ (I am Yours, and You are Mine’) hoves into view next, shimmering dulcimer tones cascading over each other, like the expectant, trilling shivers one feels when in the presence of one’s soulmate. It even ends on a smooth, jazzy note.

‘Defensivtaktik’ (Defensive Tactics) wafts in on soaring and ringing notes, floating skywards and into the blue, almost in a shoegazy and languid style. It is breathtakingly beautiful up here in the clouds, and also breathtakingly cold. This is one way to avoid the teeming masses below, a way of asserting one’s personal freedoms and turning away from the collective madness that is ‘society’. ‘Tyrions Wutausbruch’ (Tyrion’s Outburst) is a stomping electronic pounding accompanied by urgent high notes falling over each other, a mass of pent-up energy and barely-contained frustration. I wonder if this is a reference to Game of Thrones by the way, as Tyrion Lannister is a main character in that drama…

And now to the longest track (and final) track on this album, ‘Mein Löwe’ (My Lion) which opens with a sweet ethereal Eno-esque ambience, which eventually gets backed up by a trippy, loping beat that sails along serenely on invisible airborne currents, lifting us up bodily from the sordid details of earthbound existence and into the rarefied heavenly realms. Stars twinkle at our onward progress, lighting our way, and guiding us ever forward. This is absolutely my favourite on this release, a high point in what is already an album of incredible quality, and is a sweet note to round off the set with. I certainly feel blissed out on the waves of soulfulness emanating from this magical construct.

Schattenwölfe und Kraken (Shadowwolves and Octopuses) is an album of contrasts, containing a broad spectrum of expressions and emotions, every one of which demands complete immersion and interaction from the listener. This a complete tapestry, delineating a wide range of human experiences and feelings, created by a master musician with an eye for fine detail and nuance, a sculptor of sound-material every bit as familiar with his medium as a carver is with wood or stone. When I say this is a stunning album, I mean it. When Eisenlager expounds his thesis of nothing is ever static, he carries it over into every composition – none of these tracks speaks of stasis or even of formula, just a direct conversation with the materials at his disposal. More than that however, is the fact that having the material is one thing, but being able to fully realise the potential of those materials is another. Eisenlager is a deft manipulator, knowing exactly how to extract the essence of each to best effect. Utterly bewitching and full of marvels.

Available as a digital download from the Kalamine Records Bandcamp page: 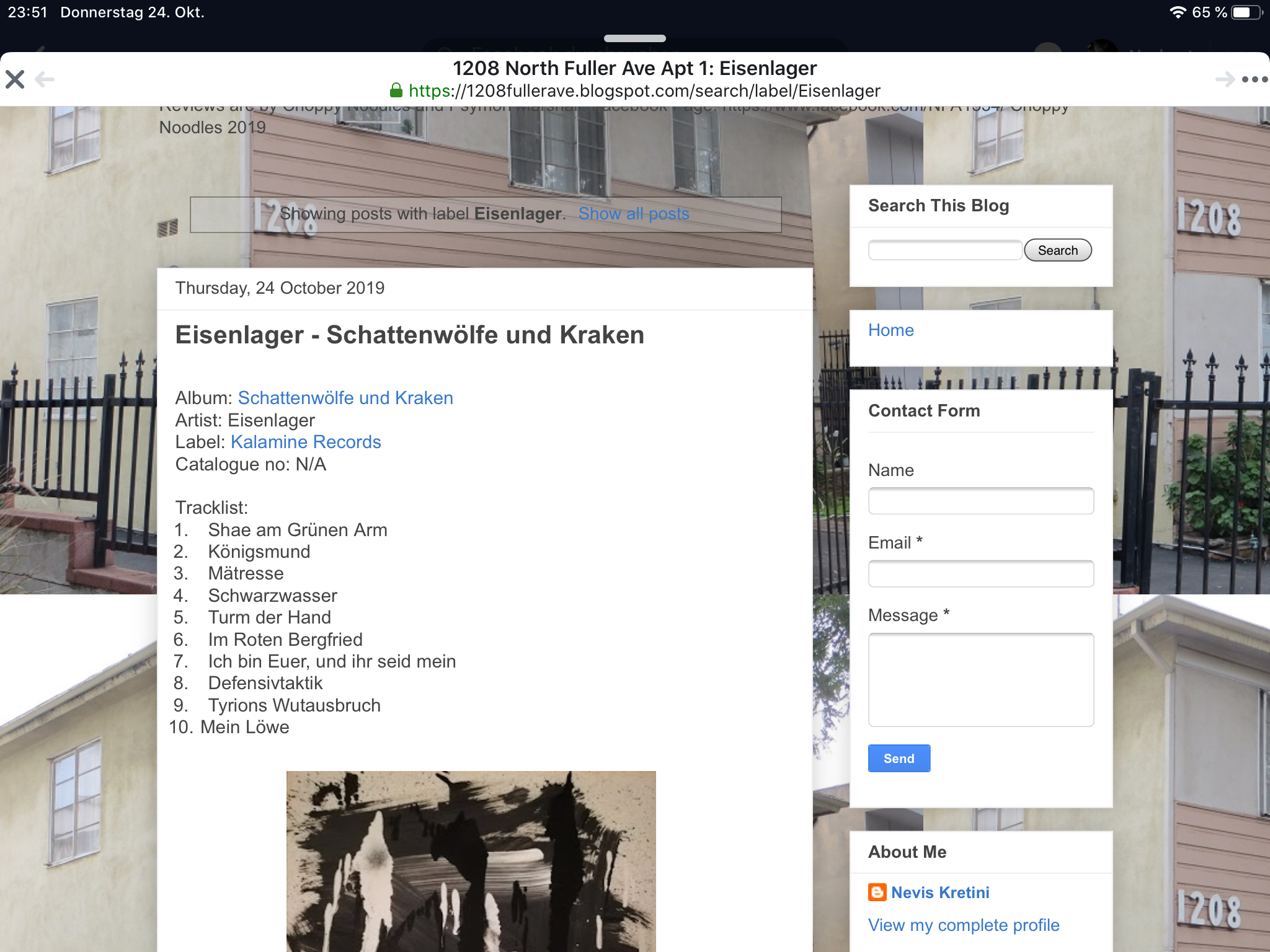